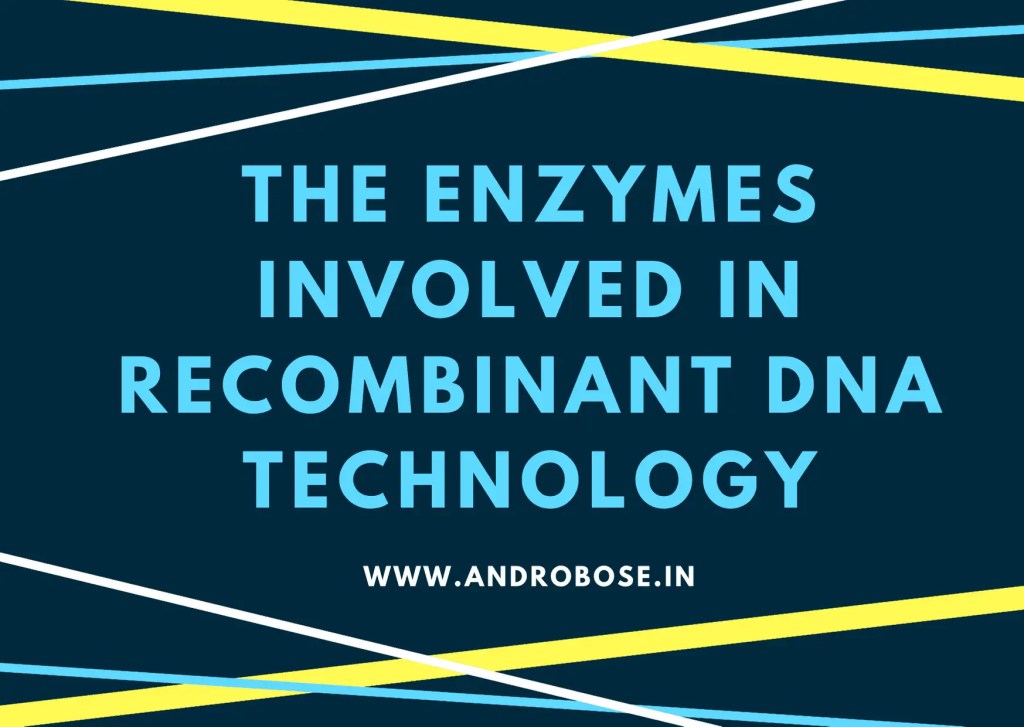 The enzymology of genetic engineering includes the following types of enzymes:

These enzymes serve as important tools to cut DNA molecules at specific sites, which is the basic need for rec DNA technology.

These are the enzymes that produce internal cuts (cleavage) in the strands of DNA, only within or near some specific sites called recognition sites/recognition sequences/ restriction sites

01 target sites. Such recognition sequences are specific for each restriction enzyme. Restriction endonuclease enzymes are the first necessity for rec DNA technology.

Another important breakthrough was the discovery of restriction enzyme Hind-II in the 1970s by Kelly, Smith, and Nathans. They isolated it from -the bacterium Haemophilus influenza. In the year 1978, the Nobel Prize for Physiology and Medicine was given to Smith, Arber, and Nathans for the discovery of endonucleases.

There are 3 main categories of restriction endonuclease enzymes:

These are the complex type of endonucleases which cleave only one strand of DNA. These enzymes have the recognition sequences of about 15 bp length (Table 1). 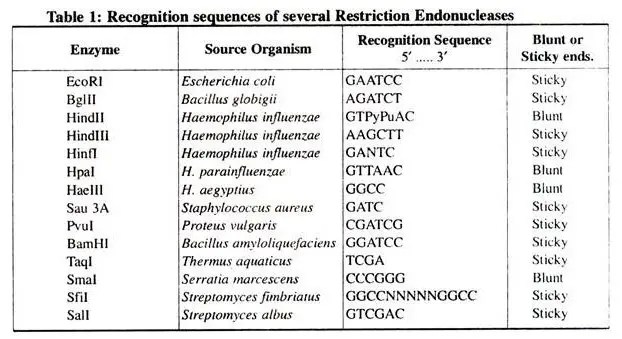 These are the most important endonucleases for gene cloning and hence for rec DNA technology. These enzymes are most stable. They show cleavage only at specific sites and therefore they produce the DNA fragments of a defined length. These enzymes show cleavage in both the strands of DNA, immediately outs.de then- recognition sequences. They require Mg++ ions for their functioning.

DNA. Only Type II Restriction Endonucleases are used tor gene cloning due to their suitability.

The recognition sequences for Type-II Restriction Endonuclease enzymes are in the form of palindromic sequences with rotational symmetry, i.e., the base sequence .n the first half of one strand of DNA is the mirror image of the second half of other strands of that DNA double helix (Fig. 2). Important examples of Type-II Restriction endonucleases include Hinfl, EcoRI, PvuII, All, Haelll, etc.

These are not used for gene cloning. They are the intermediate enzymes between Type-I and Type-II restriction endonuclease. They require Mg++ ions and ATP for cleavage and they cleave the DNA at well-defined sites in the immediate vicinity of recognition sequences, e.g. Hinf III, etc.

Nature of cleavage by Restriction Endonucleases;

The nature of cleavage produced by a restriction endonuclease is of considerable importance.  They cut the DNA molecule in two ways: 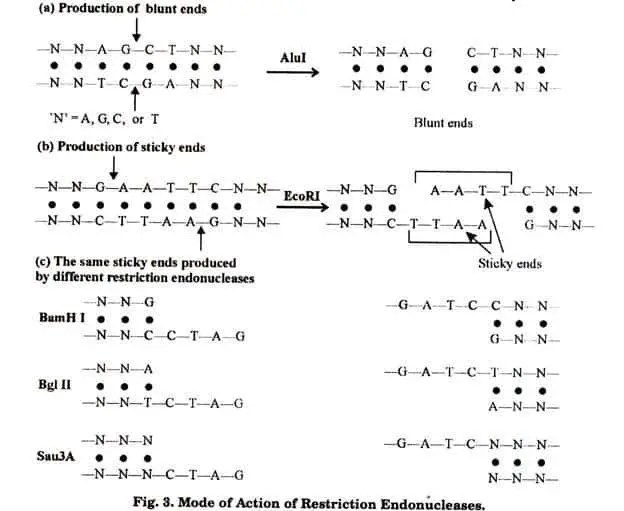 Such ends have the property to pair readily with each other when pairing conditions are provided. Another feature of the restriction endonucleases producing such sticky ends is that two or more of such enzymes with different recognition sequences may generate the same sticky ends.

Exonuclease Bal31 is employed for making the DNA fragment with blunt ends shorter from both its ends.

E Coli Exonuclease III is utilized for 3’end modifications because it has the capability to remove nucleotides from the 3′-OH end of DNA.

Lambda exonuclease is used to modify 5′ ends of DNA as it removes the nucleotides from the 5′ terminus of a linear DNA molecule.

The function of these enzymes is to join two fragments of DNA by synthesizing the phosphodiester bond. They function to repair the single-stranded nicks in DNA double helix and in rec DNA technology they are employed for sealing the nicks between adjacent nucleotides. This enzyme is also termed as a molecular glue.

These are the enzymes that synthesize a new complementary DNA strand of an existing DNA or RNA template. A few important types of DNA polymerases are used routinely in genetic engineering. One such enzyme is DNA polymerase! which, prepared from E Coli. The Klenow fragment of DNA polymerase-I .s employed to make the protruding ends double-stranded by extension of the shorter strand.

Reverse transcriptase is also an important type of DNA polymerase enzyme for genetic engineering. It uses RNA as a template for synthesizing a new DNA strand called cDNA an e complementary DNA). Its main use is in the formation of cDNA libraries. Apart from all these above-mentioned enzymes, a few other enzymes also mark their importance in genetic engineering.

A brief description of these is given below: