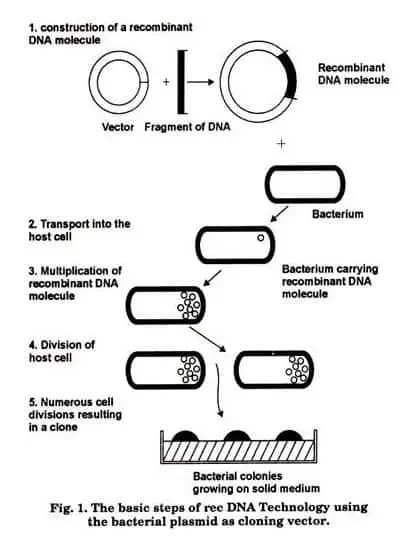 A cloning vector is a self-replicating DNA molecule, into which the DNA insert is to be integrated. A suitable cloning vector is selected in the next step of rec DNA technology. The most commonly used vectors are plasmids and bacteriophages.

The target DNA or the DNA insert which has been extracted and cleaved enzymatically by the selective restriction endonuclease enzymes [in step (i)] are now ligated (joined) by the enzyme ligase to vector DNA to form a rec DNA molecule which is often called as cloning vector-insert DNA construct.

Suitable host cells are selected and the rec DNA molecule so formed [in step (iii)] is introduced into these host cells. This process of entry of rec DNA into the host cell is called transformation. Usually selected hosts are bacterial cells like E. coli, however, yeast, fungi may also be utilized.

Finally, it is to be ensured that the foreign DNA inserted into the vector DNA is expressing the desired character in the host cells. Also, the transformed host cells are multiplied to obtain a sufficient number of copies. If needed, such genes may also be transferred and expressed into another organism.