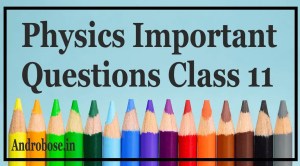 2.Water
drips from the nozzle of a shower onto the floor 2m below. The drops fall at
regular intervals of time, the first drop striking the floor at the instant the
fourth drop begins to fall. What is the location of the second drop from the
floor? 8/9m

5.A passenger of mass 80Kg
stands on the floor of an elevator. If the elevator moves up with an
acceleration 2m/s2 then the normal reaction of the floor of the
elevator on the man is (assume g=10m/s2) is

6.A 10Kg monkey climbs up a massless rope that runs over a frictionless branch of a
tree and backs down to a 15Kg package on the ground. The magnitude of the least
acceleration the monkey must have if it is to lift the package off the ground
is

7.A worker wishes to pile a cone of sand onto a circular area of radius 2m. The
coefficient of static coefficient of friction between each layer of sand along
the slope and the sand beneath it is 0.7 then assuming no slip the greatest
height that the pile of sand can have is

8.A disc of mass 1kgslides along a circular path of radius 1m, on a frictionless table, while attached to a
hanging block of mass 10kg through a hole in the table. The speed that can keep the block at rest is (assume g =
10m/s2)

11.A 50Kg bungee cord jumper is on a cliff 50m high above a stream. The elastic
bungee cord has a relaxed length of 40m. The feet of the bungee jumper stops 2m
above the stream. Assume that the cord obeys Hooke’s law the spring constant of
the cord is (assume g = 10m/s2)

12.A 5kg block is dropped from a height of 20cm
onto a spring of force constant 2000N/m. The distance moved by the block after
coming in contact with the spring is

13.Anthe object is placed on top of a hemispherical mound of ice of radius 6m. The
object is given a small push after which it starts sliding. The height above
the ground when the object leaves the hemisphericalmound is

14.A 4kg block is placed on a horizontal surface and is connected to a spring of
force constant 800N/m. The spring is compressed and then released. After the
spring attains the relaxed length the block travels over the surface for a
distance 10m. If the coefficient of kinetic friction for the surface is 0.4 the
heat generated is

16.A rod strikes a stationary ball with an average force of 50N over time of 10ms.
If the ball has mass 0.2kg the speed of the ball after the impact is

18.A wheel of radius R is placed against a step of height h. If the mass of the
wheel is 10kg then the horizontal force required to be applied to the axle to lift
the wheel over the step assuming R = 2h is (take g = 10m/s2)

20.A block of mass 5kg is attached to two identical springs on either side of it. The
springs are attached to the walls. The spring constant of the springs is 25N/m.
The frequency of oscillation of the mass, when displaced from the equilibrium,
is

21.An acoustic burglar alarm has a source emitting waves of frequency 100Hz. When a
stranger moves towards the alarm a beat frequency of 5Hz is detected. The speed
of the stranger is (assume the speed of sound as 330m/s)

22.10 moles of an ideal gas expands adiabatically from an initial temperature 100K to
a final temperature 200K. If CV is the molar specific heat capacity
of the gas at constant volume the work done by the gas is

23.The motor in a refrigerator has a power of 240W. The freezing chamber is at 290K
and the outside air is at 320K. What is the maximum amount of energy that can be
extracted in 30min assuming that the refrigerator works as a Carnot cycle in
reverse? 40500J

24.Two
small conducting balls of mass 50g and carrying a charge 10microcoulomb hang
from a thread of length 50cm. The separation between the balls at any instant
is (g =10m/s2)

25.
A thin non conducting rod of length 1m has a
the charge of 1C uniformly distributed over it. What is the electric field at a
a the point on the perpendicular bisector of the rod 0.5m from the center? 24.5 x 109V/m

26.Charge
is distributed uniformly throughout the volume of an infinitely long cylinder
of radius R with a charge density ρ. The electric field at a distance r
(< R) cm from the axis of the cylinder is

27.A cylindrical capacitor has an internal radius r and external radius R. Half the stored
electrical energy lies within a cylinder of radius

28.A wire L meters long is stretched to twice its length
such that there is no change in the volume of the wire. If the wire earlier had
a resistance R the new resistance of the wire is

30.Two long parallel wires of equal radius R are placed a distance r apart. If they
carry equal currents in opposite directions then the inductance per unit length
of the pair of wires is

32.A source and a screen are a distance 10cm apart. If the focal length of the lens
is 2cm then two real images are formed for lens position separated by

34.The wavelength associated with the cutoff frequency for metal is 300nm. What is
the maximum kinetic energy of electrons ejected from the metal surface by UV
light of wavelength 250nm? 0.82eV

35.A 1.00g sample of Samarium (Sm) emits alpha particles at a rate of 120 particles/s. The isotope responsible for the decay is
Sm – 147 has a natural abundance in bulk samarium of
15%. The half-life for the decay process is

Thank youu Have A Nice Day……