The basic strategy in molecular cloning is to insert a DNA fragment of interest (a segment of DNA) into a DNA molecule (called a vector) that is capable of independent replication in a host cell. The result is a recombinant molecule composed of the DNA insert linked to vector DNA sequences. Construction of these recombinant DNA molecules is dependent on the ability to covalently seal single-stranded nicks in DNA. This process is accomplished both in vivo and in vitro by the enzyme DNA ligase. DNA ligation is the process of joining together two DNA molecules ends (either from the same or different molecules). The enzyme that joins the DNA fragments is called DNA ligases. The DNA ligase seals the nicks in DNA by the formation of the phosphodiester bond between adjacent 3’ hydroxyl and 5’ phosphate termini. The enzyme extensively used in joining DNA fragments is T4 DNA ligase. The ligase joins both cohesive ends as well as blunt-ended DNA. It is a single polypeptide with an M.W of 68,000 Dalton requiring ATP as an energy source. The maximal activity pH range is 7.5-8.0. The enzyme exhibits 40% of its activity at pH 6.9 and 65% at pH 8.3. The DNA fragment (PCR product) has an extra ‘A’ at 3’ end so that it can complementarily bind to the ‘T’ at the 5’ end of the T- vector 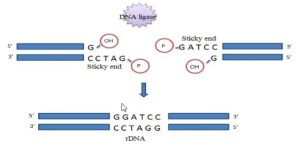 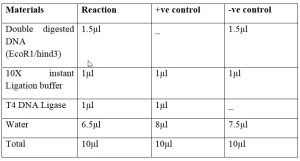 Isolation of Genomic DNA from E.coli