Define Immunity? And The different barrier associated with Innate Immunity 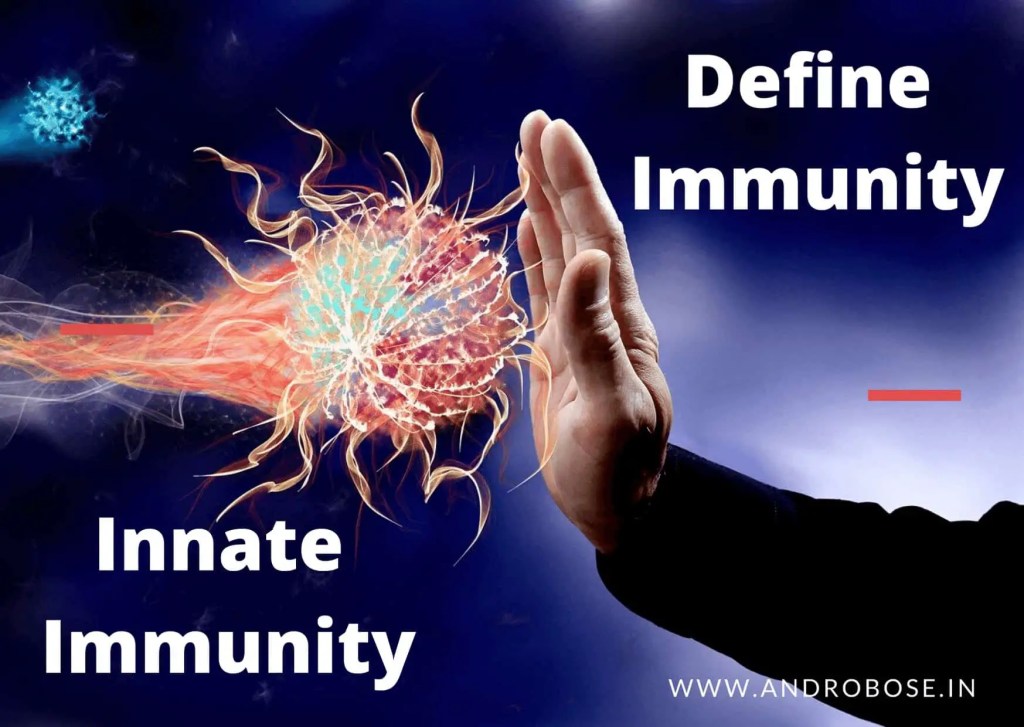 Ans: The immune system comprises both innate and adaptive immune responses. Innate immunity occurs naturally because of genetic factors or physiology; it is not induced by infection or vaccination but works to reduce the workload for the adaptive immune response. Both the innate and adaptive levels of the immune response involve secreted proteins, receptor-mediated signaling, and intricate cell-to-cell communication. The innate immune system developed early in animal evolution, roughly a billion years ago, as an essential response to infection. Innate immunity has a limited number of specific targets: any pathogenic threat triggers a consistent sequence of events that can identify the type of pathogen and either clear the infection independently or mobilize a highly specialized adaptive immune response. For example, tears and mucus secretions contain microbicidal factors. 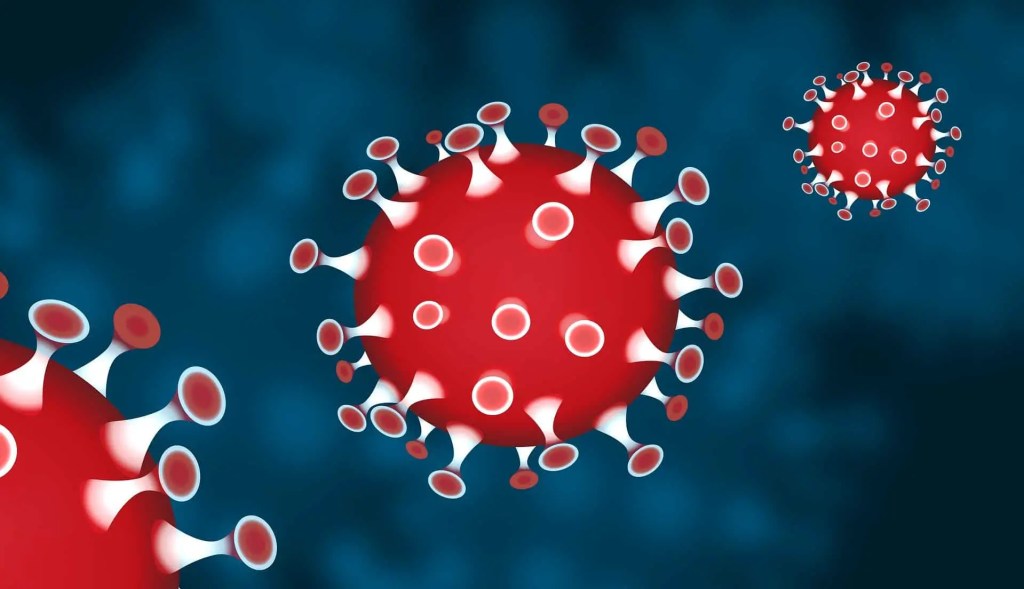 Before any immune factors are triggered, the skin functions as a continuous, impassable barrier to potentially infectious pathogens. Pathogens are killed or inactivated on the skin by desiccation (drying out) and by the skin’s acidity. In addition, beneficial microorganisms that coexist on the skin compete with invading pathogens, preventing infection. Regions of the body that are not protected by skin (such as the eyes and mucus membranes) have alternative methods of defense, such as tears and mucus secretions that trap and rinse away pathogens, and cilia in the nasal passages and respiratory tract that push the mucus with the pathogens out of the body. Throughout the body are other defenses, such as the low pH of the stomach (which inhibits the growth of pathogens), blood proteins that bind and disrupt bacterial cell membranes, and the process of urination (which flushes pathogens from the urinary tract). Despite these barriers, pathogens may enter the body through skin abrasions or punctures, or by collecting on mucosal surfaces in large numbers that overcome the mucus or cilia. Some pathogens have evolved specific mechanisms that allow them to overcome physical and chemical barriers. When pathogens do enter the body, the innate immune system responds with inflammation, pathogen engulfment, and secretion of immune factors and proteins.

An infection may be intracellular or extracellular, depending on the pathogen. All viruses infect cells and replicate within those cells (intracellularly), whereas bacteria and other parasites may replicate intracellularly or extracellularly, depending on the species. The innate immune system must respond accordingly: by identifying the extracellular pathogen and/or by identifying host cells that have already been infected. When a pathogen enters the body, cells in the blood and lymph detect the specific pathogen-associated molecular patterns (PAMPs) on the pathogen’s surface. PAMPs are carbohydrate, polypeptide, and nucleic acid “signatures” that are expressed by viruses, bacteria, and parasites but which differ from molecules on host cells. The immune system has specific cells, described in Figure, with receptors that recognize these PAMPs. A macrophage is a large phagocytic cell that engulfs foreign particles and pathogens. Macrophages recognize PAMPs via complementary pattern recognition receptors (PRRs). PRRs are molecules on macrophages and dendritic cells which are in contact with the external environment. A monocyte is a type of white blood cell that circulates in the blood and lymph and differentiates into macrophages after it moves into infected tissue. Dendritic cells bind molecular signatures of pathogens and promote pathogen engulfment and destruction. Toll-like receptors (TLRs) are a type of PRR that recognizes molecules that are shared by pathogens but distinguishable from host molecules). TLRs are present in invertebrates as well as vertebrates, and appear to be one of the most ancient components of the immune system. TLRs have also been identified in the mammalian nervous system. 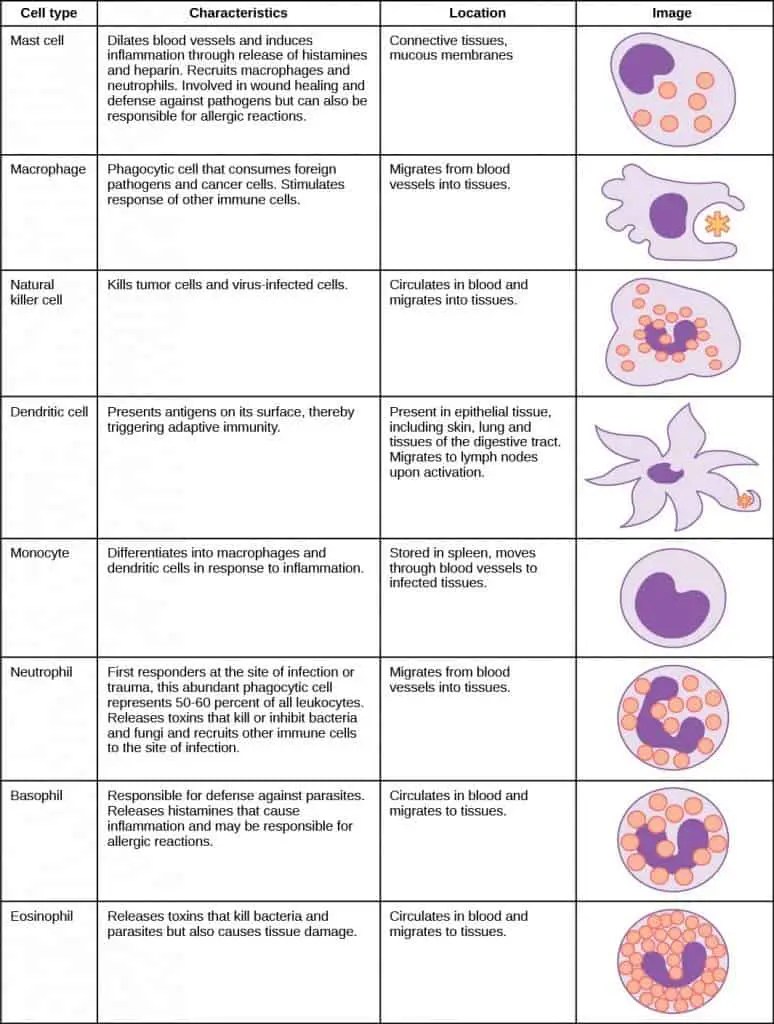 The binding of PRRs with PAMPs triggers the release of cytokines, which signal that a pathogen is present and needs to be destroyed along with any infected cells. A cytokine is a chemical messenger that regulates cell differentiation (form and function), proliferation (production), and gene expression to affect immune responses. At least 40 types of cytokines exist in humans that differ in terms of the cell type that produces them, the cell type that responds to them, and the changes they produce.

One subclass of cytokines is the interleukin (IL), so named because they mediate interactions between leukocytes (white blood cells). Interleukins are involved in bridging the innate and adaptive immune responses. In addition to being released from cells after PAMP recognition

cytokines are released by the infected cells which bind to nearby uninfected cells and induce those cells to release cytokines, which results in a cytokine burst. 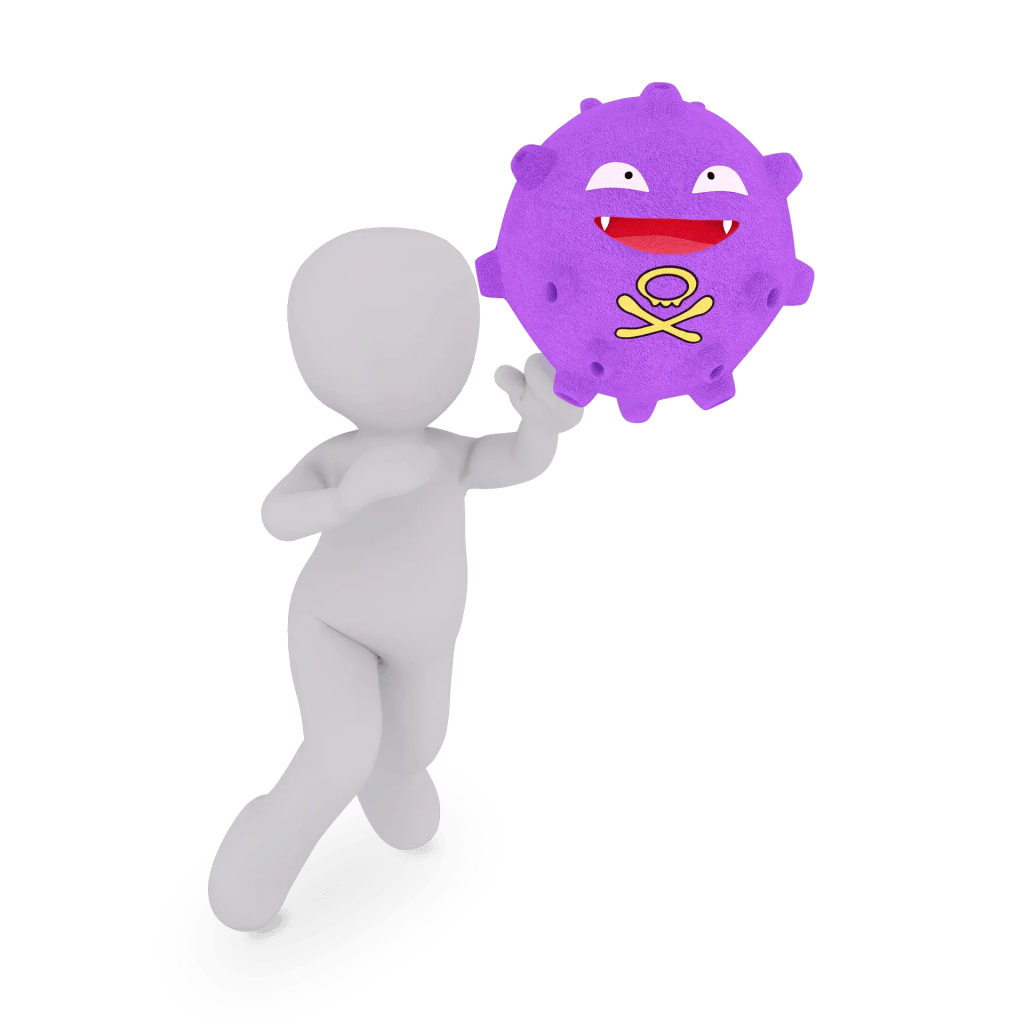 The first cytokines to be produced are pro-inflammatory; that is, they encourage inflammation, the localized redness, swelling, heat, and pain that result from the movement of leukocytes and fluid through increasingly permeable capillaries to a site of infection. The population of leukocytes that arrives at an infection site depends on the nature of the infecting pathogen. Both macrophages and dendritic cells engulf pathogens and cellular debris through phagocytosis. A neutrophil is also a phagocytic leukocyte that engulfs and digests pathogens. Neutrophils are the most abundant leukocytes of the immune system. Neutrophils have a nucleus with two to five lobes, and they contain organelles, called lysosomes, that digest engulfed pathogens. An eosinophil is a leukocyte that works with other eosinophils to surround a parasite; it is involved in the allergic response and in protection against helminths (parasitic worms).

Neutrophils and eosinophils are particularly important leukocytes that engulf large pathogens, such as bacteria and fungi. A mast cell is a leukocyte that produces inflammatory molecules, such as histamine, in response to large pathogens. A basophil is a leukocyte that, like a neutrophil, releases chemicals to stimulate the inflammatory response. Basophils are also involved in allergy and hypersensitivity responses and induce specific types of inflammatory responses. Eosinophils and basophils produce additional inflammatory mediators to recruit more leukocytes. Hypersensitive immune response to harmless antigens, such as in pollen, often involves the release of histamine by basophils and mast cells.

Cytokines also send feedback to cells of the nervous system to bring about the overall symptoms of feeling sick, which include lethargy, muscle pain, and nausea. These effects may have evolved because the symptoms encourage the individual to rest and prevent them from

spreading the infection to others. Cytokines also increase the core body temperature, causing a fever, which causes the liver to withhold iron from the blood. Without iron, certain pathogens, such as some bacteria, are unable to replicate; this is called nutritional immunity