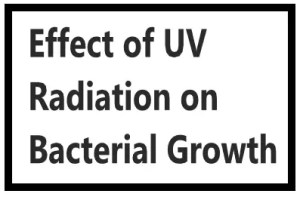 To Study the effect of UV exposure on the growth of bacterial cells.

Mutations are a heritable change in the base sequence of DNA. Such mutations can be neutral or beneficial to an organism, but most are actually harmful because the mutation will often result in the loss of an important cellular function. Mutagens can be in the form of a chemical (nicotine) or in the form of electromagnetic radiation. Again there are two forms of electromagnetic radiation that are mutagenic; ionizing radiation and nonionizing radiation. Ionizing radiation (x-ray, gamma radiation) has the potential to remove electrons from molecules in a cell. These electrons called free radicals which damage most other molecules in a cell, such as DNA or RNA, by oxidizing them. Non-ionizing radiation (UV) causes the formation of pyrimidine dimers in the DNA molecule i.e. adjacent pyrimidine units are ionized forming highly reactive free radicals. These ionized pyrimidines interlink to form the dimers. The dimerization occurs by the formation of cyclobutane ring and this ring inhibits the replication process, thus hindering the normal functioning of the cell