Coding For Kids: Getting Started Learning Programming Computer programming is rapidly becoming increasingly popular. In turn, more and more parents want their children to learn coding – and for good reason. According to the Bureau of Labor, the median pay for software developers is $103,560 per year, with demand expected to increase by 24% between 2016 and 2026, a growth rate that is significantly faster than that of other occupations. Computer programming also teaches a number of important life skills, like perseverance, algorithmic thinking, and logic. Teaching your kids programming from a young age can set your child up for a lifetime of success.

While programming is offered by some schools in India, many schools don’t include regular computer science education or coding classes in their curriculum. When offered, it is usually limited to an introductory level, such as a few classes using Code.org or Scratch. This is mainly because effective education in computer programming generally depends on teachers with ample experience in computer science or engineering.

How can I get my child interested in coding?

This is where Juni can help. With instructors from the top computer science universities in the US, Juni students work under the tutelage of instructors who have experience in the same advanced coding languages and tools used at companies like Facebook, Google, and Amazon. Juni’s project-based approach gives students hands-on experience with professional languages like Python, Java, and HTML. The rest of this article addresses some of the most frequently asked questions about coding for kids.

A good way to get your child excited about programming is to make it entertaining! Instead of starting with the traditional, “Hello World” approach to learning programming, intrigue your children with a curriculum that focuses on fun, engaging projects.

Children are more likely to stay interested in something that they can relate to. This is easy to do with coding because so many things, from videogames like Minecraft to movies like Coco, are created with code! Reminding students that they can learn the coding skills necessary to create video games and animation is a great motivator.

Introducing programming to young children through lines of syntax-heavy code can make coding seem like a large, unfriendly beast. Starting with a language like Scratch instead, which uses programming with blocks that fit together, makes it easier for kids to focus on the logic and flow of programs.

How do I teach my child to code?

There are a few approaches you can take in teaching kids how to code. Private classes with well-versed instructors are one of the most conducive ways to not only expose your kids to programming and proficiently develop your children’s coding skills, but also sustain their interest in the subject. 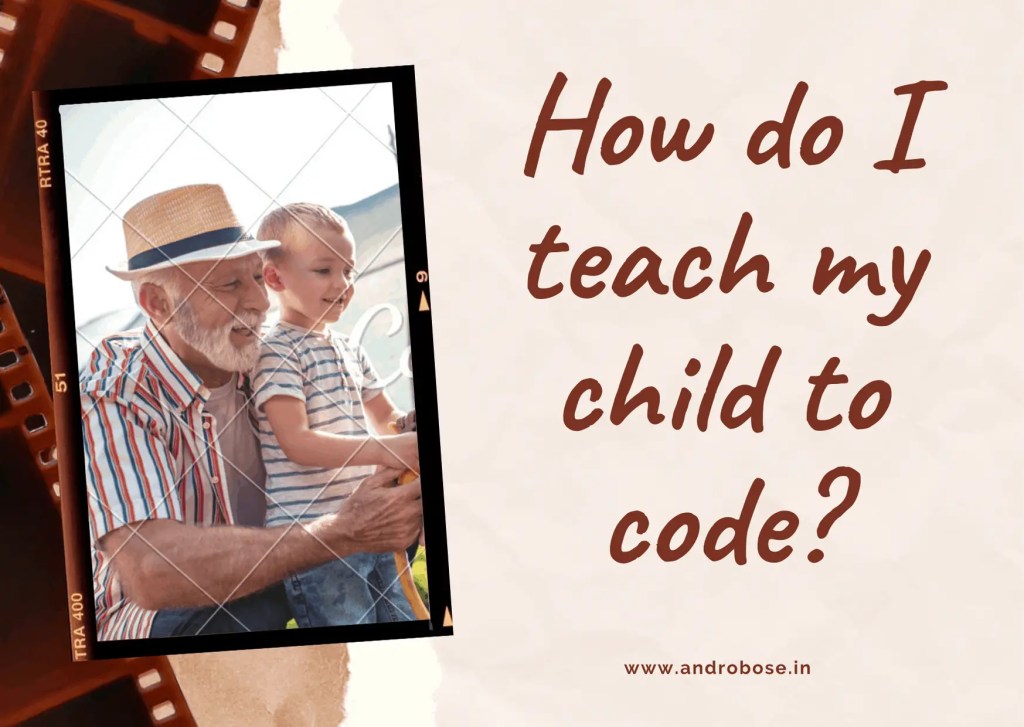 At Juni, we offer private online classes for students ages 5-18 to learn to code at their own pace and from the comfort of their own homes.

Via video conference, our students and instructors share a screen. This way, the instructor is with them every step of the way. The instructor first begins by reviewing homework from the last class and answering questions. Then, the student works on the day’s coding lesson.

The instructor can take control of the environment or annotate the screen — this means the instructor can type out examples, help students navigate to a particular tool or highlight where in the code the student should look for errors — all without switching seats. Read more about the experience of a private coding class with Juni.

We have designed a curriculum that leans into each student’s individual needs. We chose Scratch as the first programming language in our curriculum because its drag-and-drop coding system makes it easy to get started, focusing on the fundamental concepts. In later courses, we teach Python, Java, Web Development, AP Computer Science A, and a training program for the USA Computing Olympiad. We even have Juni Jr. for students ages 5-7.

There are a number of coding apps and coding games that children can use to get familiar with coding material. While these don’t have the same results as learning with an instructor, they are a good place to start.

Codeacademy is aimed at older students who are interested in learning text-based languages. Coding exercises are done in the browser, and have automatic accuracy-checking. This closed platform approach prevents students from the full experience of creating their own software, but the curriculum map is well thought out.

Khan Academy is an online learning platform, designed to provide free education to anyone on the internet. Khan Academy has published a series on computer science, which teaches JavaScript basics, HTML, CSS, and more. There are video lessons on a number of topics, from web page design to 2D game design. Many of the tutorials have written instructions rather than videos, making them better suited for high school students.

What is the best age to start learning to code?

Students as young as 5 years old can start learning how to code. At this age, we focus on basic problem solving and logic, while introducing foundational concepts like loops and conditionals. It is taught using kid-friendly content that is interesting as well as projects that involve creativity and an interface that isn’t as syntax-heavy. At ages 5-10, students are typically learning how to code using visual block-based interfaces.

What are the best programming languages for kids?

With young students (and even older students), a good place to start building programming skills is a visual block-based interface, such as Scratch. This allows students to learn how to think through a program and form and code logical steps to achieve a goal without having to learn syntax (i.e. worrying about spelling, punctuation, and indentation) at the same time.

When deciding on text-based languages, allow your child’s interests to guide you. For example, if your child is interested in creating a website, a good language to learn would be HTML. If they want to code up a game, they could learn Python or Java.

What kind of computer does my child need to learn to code? 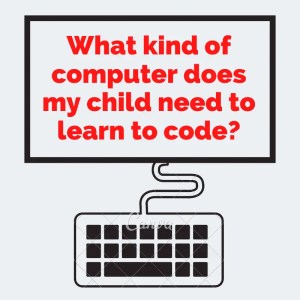 This depends on your child’s interests, your budget, and the approach you would like to take. Many online coding platforms, like repl.it, are web-based and only require a high-speed internet connection. Web-based platforms do not require computers with much processing power, which means that they can be run on nearly any computer manufactured within the last few years. Higher-level programming using professional tools requires a Mac, PC, or Linux with a recommended 4G of RAM along with a high-speed internet connection.

Why should kids learn to code?

Coding is all about the process, not the outcome.

The process of building software involves planning, testing, debugging, and iterating. The nature of coding involves checking things, piece by piece, and making small improvements until the product matches the vision. It’s okay if coders don’t get things right on the first attempt. Even stellar software engineers don’t get things right on the first try! Coding creates a safe environment for making mistakes and trying again.

Coding also allows students to stretch their imagination and build things that they use every day. Instead of just playing someone else’s video game, what if they could build a game of their own? Coding opens the doors to endless possibilities.

Reason 2: Learning to code gives kids the skills they need to bring their ideas to life

Coding isn’t about rote memorization or simple right or wrong answers. It’s about problem-solving. The beautiful thing about learning to problem solve is, once you learn it, you’re able to apply it across any discipline, from engineering to building a business.

Obviously, students who learn computer science are able to build amazing video games, apps, and websites. But many students report that learning computer science has boosted their performance in their other subjects, as well. Computer science has clear ties to math, and has interdisciplinary connections to topics ranging from music to biology to language arts.

Learning computer science helps develop computational thinking. Students learn how to break down problems into manageable parts, observe patterns in data, identify how these patterns are generated, and develop the step-by-step instructions for solving those problems.

Reason 3: Learning to code prepares kids for the economy of the future

According to WIRED magazine, by 2020 there will be 1 million more computer science-related jobs than graduating students qualified to fill them. Computer science is becoming a fundamental part of many cross-disciplinary careers, including those in medicine, art, engineering, business, and law.

Many of the most innovative and interesting new companies are tackling traditional careers with new solutions using the software. Software products have revolutionized industries, from travel (Kayak, Airbnb, and Uber) to law (Rocket Lawyer and LegalZoom). Computing is becoming a cornerstone of products and services around the world, and getting a head start will give your child an added advantage.

Many leading CEOs and founders have built amazing companies after studying computer science. Just take a look at the founders of Google, Facebook, and Netflix!

Although computer science is a rigorous and scientific subject, it is also creative and collaborative. Though many computer scientists simply hold the title of Software Engineer or Software Developer, their scope of work is very interesting. Here is a look at some of the work that they do:

Computer scientists also work as data scientists, who clean, analyze, and visualize large datasets. With more and more of our world being encoded as data in a server, this is a very important job. For example, the IRS uncovered $10 billion worth of tax fraud using advanced data analytics and detection algorithms. Programmers also work as video game developers. They specialize in building fun interactive games that reach millions of people around the world, from Fortnite to Minecraft. 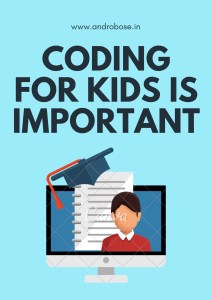 All of these career paths and projects require cross-functional collaboration among industry professionals that have a background in programming, even if they hold different titles. Some of these people may be software engineers, data scientists, or video game designers, while others could be systems analysts, hardware engineers, or database administrators. The sky is the limit!

How can you get your kids started on any of these paths? By empowering them to code! Juni can help your kids get set up for a successful career in computer science and beyond. Our founders both worked at Google and developed Juni’s curriculum with real-world applications and careers in mind.

Coding for Kids is Important

Coding for kids is growing in popularity, as more and more families recognize coding as an important tool in the future job market. There is no “one-size-fits-all” for selecting a programming course for students. At Juni, our one-on-one classes allow instructors to tailor a course to meet a student’s specific needs. By learning how to code, your kids will not only pick up a new skill that is both fun and academic but also gain confidence and learn important life skills that will serve them well in whatever career they choose. Good luck, to Your Kids Happy Coding  Special; Thanks To Alison Clarke from the Juni Learning team

“We are very happy with Juni Learning. My 10-year-old daughter loves it so much she has done Scratch, Python, and Java. (She started at 8 years old.) My other daughter who is 10 also decided to do it too after she saw how engaged her sister was. They have young knowledgeable teachers from the top schools in the country who are teaching my kids. They make it fun and engaging.”

1 thought on “Coding For Kids or {programming for beginners}”