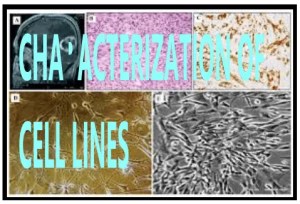 Why characterization of cell lines?

we now cell culture is the process in which cell growth in a suitable medium under controlled condition for desire purpose or product. but during this process cells undergoes cross-contamination or miss-identification so detect to this require characterization of cell lied. it also requires to confirm that cell lines derived from its tissue of origin. so characterization requires to what cell got during culture.

cells lines have been characterized at the DNA, RNA, and protein level which allow to scientist to choose the correct cell line to further research or uses.

Isoenzyme Analysis- is very useful to detect contamination of cell lines. n this process electrophoretic mobility of many isoenzymes compere with standard profiled to the imagination for the human dog, and mouse cells. that method also used to detect interspecific contamination.

Mutation Detection– it is an appropriate method base of the somatic transformation of cells into tumor cell witch than used to detect cell contamination and about its origin tissue. in this process, normal DNA fragment used to compare to mutant DNA.

of chromosome molecule. in the same method PCR (polymerase chain reaction) method also used on basis of the extension of DNA molecule on the bass of strand provided of cells. both are a good method to match to DNA of desire cell which used in  characterization,