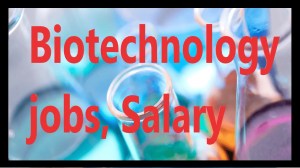 Biotechnology jobs can be found in virtually any work setting, such as with hospitals, government agencies, research facilities, food-manufacturing firms, and pharmaceutical laboratories. Most biotechnicians operate in a laboratory setting, performing tasks that involve manipulating subatomic systems within microorganisms. While a Ph.D. is almost mandatory, there are certain facilities which allow those with only a Masters degree to work under the supervision of a more experienced individual, often while pursuing their doctorate degree.

Individuals qualified to do such work will normally have to have a Ph.D. in at least one of these areas: organic chemistry, biology, animal and plant science, microbiology and other life science disciplines. However, a few research laboratories may employ those with a Master’s degree who can then work with a more experienced biotechnician. If you are interested in obtaining one of the many biotechnology jobs available, be prepared to spend at least six to seven years attending university courses geared towards biology, chemistry, and genetics, in addition to participating in intense internships at various laboratories.

Biotechnology jobs are focused on chemical interactions and the maneuvering of chemical structures to enhance pharmaceuticals, genetics, or agricultural dynamics. Opportunities for those specializing in chemistry are constantly being created in the biotechnology field. Having a background heavy in chemistry courses is a must for these jobs. For example, as a chemical engineer working in a field of biotechnology, you could be developing such things as polymers, drugs, fertilizers, and petrochemicals, just to name a few, for which you must have the proper educational background.

The Stuff of Science Fiction

In biotechnology, cloning refers to a method utilized to duplicate DNA fragments and cells in order to create populations of individuals which are genetically identical or improved in some manner over the original. Biotechnology jobs involving cloning are highly specialized and usually affect agricultural processes, such as seed cloning, in order to experiment with ways to enhance crop productivity. However, the practices of animal and organ cloning have been advancing rapidly in the past two decades, with the famous cloned sheep Dolly making her appearance nearly twenty years ago.

Over one hundred companies which are specifically considered to be biotechnology firms exist today. Most are based in the United States, with a few in Sweden, Germany, and Canada. The biggest company, Amgen, is located in California and employs over 20,000 biotechnicians who specialize in creating pharmaceuticals, such as Sensipar and Enbrel. Genentech Engineering Technology is the second largest U.S. biotech company, which houses over 10,000 biotechnology jobs. Genetech primarily conducts research in oncology, infectious diseases, and immunology and also has significant numbers of scientific positions.

Where to Search for Biotechnology Jobs

After acquiring a master’s or doctoral degree, the biotechnician will find biotechnology jobs plentiful, but most of these jobs require specific individuals who are skilled in specific areas. Resumes which reflect an extensive academic career, as well as several internships and details of the project pursued during the internship, will help the new graduate receive interviews and offers of employment. Internet sites such as Indeed, Yahoo Jobs and Monster will regularly post jobs seeking biotechnicians. In addition, many universities offer job placement assistance following graduation, often continuing post-graduate work begun in the university’s laboratories.

The outlook for biotechnology jobs continues to grow as insights and inventions are always emerging in the fields of genetics, cloning, and pharmaceuticals, among others. As a fascinating and satisfying career choice, biotechnology offers the interested individual opportunities to make a difference in the world while using the knowledge and skills acquired during long years of education and work

An average biotechnology salary will vary because of the array of job titles included within the field. It will also depend on where the biotechnician is working, with West Coast jobs paying more than East Coast jobs. Entry-level biotechnology jobs usually pay anywhere from $30,000 to $40,000 a year, with the highest-paying biotechnological companies offering the right applicant annual wages of over $100,000. Salary packages of biotechnicians also usually include excellent insurance and retirement packages.

A biochemist is a scientist who evaluates the chemical processes of living organisms in hopes of applying this knowledge to the benefit of the medical as well as agricultural and other industries. The expected average salary of a biochemist working in the U.S. is $45,000 to $50,000, with those choosing work overseas making salaries commensurate to that country’s biotechnology salary. Biochemists who are consultants or supervisors will earn $80,000 to $100,000, depending on the company and location of the company for which he or she is working.

Making It as a Microbiologist

Microbiologists love studying and manipulating organisms that can only be seen with powerful electron microscopes. Bacteria, viruses and other pathogens intrigue microbiologists, who are often the biotechnicians which work in isolation in their own laboratory. An entry-level microbiologist can expect to earn around $45,000 a year working in the United States. Those with advanced degrees and several years of experience as a researcher will typically earn an average biotechnology salary of $70,000.

In Charge – Research and Development Supervisor

Research and development supervisors make quite a bit more than the median biotechnology salary, mainly because they possess extensive experience and knowledge in more than one area of biotechnology. They will oversee a project and direct personnel in procedural processes, as well as consolidating and analyzing data received by the group of researchers they are managing. A research and development supervisor can expect to make over $100,000 a year working in the U.S., with the possibility of earning higher wages in places like Denmark or Germany.

With the possibility of a biotech scientist (grade III) making well over $120,000, these individuals can be considered the cream of the crop as far as biotechnicians and a biotechnology salary goes. They can choose to work alone or as supervisors, depending on their field of expertise. Being a scientist definitely requires post-doctoral work and a Ph. D, along with at least 5, but preferably 7 or 8, years of experience doing research which has usually resulted in a significant and meaningful discovery.

While the researchers and scientists are busy in their laboratories discovering beneficial pharmaceuticals and new ways to grow ultra-nutritional foods, technical writers in biotechnology are busy writing technical reports, articles for academic magazines and other documentation as a necessary aspect of promoting various biotechnological fields. Earning a decent biotechnology salary of approximately $80,000, biotechnical writers may work for pharmaceutical firms trying to market drugs to promotional companies. This field requires a bachelor’s degree and several years of experience, along with a general familiarity with different biotechnological concepts, especially chemistry.

In addition to a good to an excellent salary, biotechnology specialists can expect to receive bonuses, pensions, paid vacations and other perks related to working for biotech firms, but this comes at the cost of time and serious effort. Diligence, attention to university coursework and too minute details, and a burning desire to succeed are necessary traits of a biotechnologist but in the end, you will be rewarded with one of the most fascinating jobs on Earth.