Types Of Antibodies And Their Functions

Antibodies can be divided into five classes—IgM, IgG, IgA, IgD, IgE—based on their physicochemical, structural, and immunological properties.

Define Antibody? Explain its Classes and their biological Activities?

Ans: Antibody (Ab) also know as Immunoglobulin (Ig) is the large Y-shaped protein produced by the body’s immune system when it detects harmful substances, called antigens like bacteria and viruses.

The production of antibodies is a major function of the immune system and is carried out by a type of white blood cell called a B cell (B lymphocyte), differentiated B cells called plasma cells. The produced antibodies bind to specific antigens express in external factors and cancer cells.

Antibodies are heavy (~150 kDa) globular plasma proteins. The basic structure of all antibodies is the same

There are five types of Ig heavy chain (in mammal) denoted by the Greek letters: α, δ, ε, γ, and μ. There are two types of Ig light chains (in mammals), which are called lambda (λ) and kappa (κ).

Each heavy and light chain in an immunoglobulin molecule contains an amino-terminal variable (V) region that consists of 100 to 110 amino acids and differs from one antibody to another. The remainder of each chain in the molecule – the constant (C) region exhibits limited variation that defines the two light chain subtypes and the five heavy chain subclasses.

Some heavy chains (α, δ, γ) also contain a proline-rich hinge region. The amino terminal portions, corresponding to the V regions, bind to antigen; effector functions are mediated by the carboxy-terminal domains. The ε and μ heavy chains, which lack a hinge region, contain an additional domain in the middle of the molecule. CHO denotes a carbohydrate group linked to the heavy chain.

Types Of Antibodies And Their Functions

A serum containing antigen-specific antibodies is called antiserum. The 5 types – IgG, IgM, IgA, IgD, IgE – (isotypes) are classified according to the type of heavy chain constant region and are distributed and function differently in the body.

IgG
IgG is the most abundant antibody isotype in the blood (plasma), accounting for 70-75% of human immunoglobulins (antibodies). IgG detoxifies harmful substances and is important in the recognition of antigen-antibody complexes by leukocytes and macrophages. IgG is transferred to the fetus through the placenta and protects the infant until its own immune system is functional.

IgM
IgM usually circulates in the blood, accounting for about 10% of human immunoglobulins. IgM has a pentameric structure in which five basic Y-shaped molecules are linked together. B cells produce IgM first in response to microbial infection/antigen invasion.
Although IgM has a lower affinity for antigens than IgG, it has higher avidity for antigens because of its pentameric/hexameric structure. IgM, by binding to the cell surface receptor, also activates cell signaling pathways.

IgE
IgE is present in minute amounts, accounting for no more than 0.001% of human immunoglobulins. Its original role is to protect against parasites. In regions where the parasitic infection is rare, IgE is primarily involved in allergy.

IgD
IgD accounts for less than 1% of human immunoglobulins. IgD may be involved in the induction of antibody production in B cells, but its exact function remains unknown. 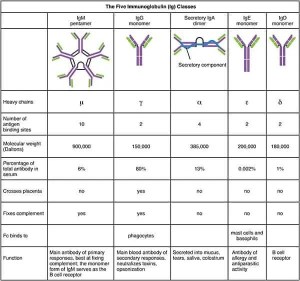 Androbose.In Does Not Own This Book/materials, Neither Created Nor Scanned. We Provide The Links Which Are Already Available On The Internet. For Any Quarries, Disclaimer Is Requested To Kindly Contact Us – [email protected] or https://androbose.in/contact/ This Copy Was Provided For Students Who Are Financially Troubled But Deserving To Learn To Thank You